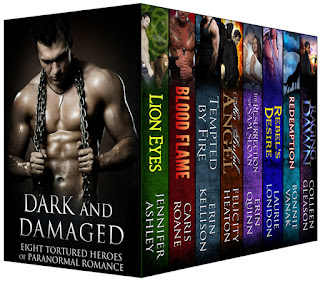 Dark and Damaged: Eight Tortured Heroes of Paranormal Romance Boxed Set is now available worldwide for a special introductory price of only $0.99!

Here’s more about this fantastic eight book boxed set, including an excerpt from one of the stories.

Dark and Damaged: Eight Tortured Heroes of Paranormal Romance is available from Amazon Kindle, Kobo Books, Barnes and Noble Nook, Apple iBooks stores and other retailers. Find the links to your preferred retailer at: http://www.felicityheaton.co.uk/dark-and-damaged/ 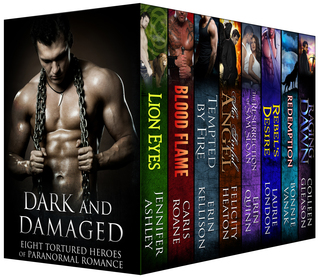 LION EYES by Jennifer Ashley
Bree has just decided to give up trying to be a Shifter groupie when a lion Shifter slams into her truck and tells her to drive. Seamus is on the run from hunters, other Shifters, and who knows who else. All Bree knows is that he’s compelling, needs her help, and most intriguing of all, wears no Collar...

BLOOD FLAME by Caris Roane
Vampire Officer Connor of the Crescent Border Patrol tries to suppress his desire for the powerful witch, Iris Meldeere. Because the woman possesses the ability to kill him with the tips of her fingers, how can he possibly fall in love with her? When a double homicide throws them together, he soon finds his deepest fantasies fulfilled as Iris succumbs to his seductions. But as they battle together to stay alive, and love begins to consume them both, will the witch be able to forgive the dark secrets of his past …

HER SINFUL ANGEL by Felicity Heaton
Cast out of Heaven and now the king of Hell, Lucifer is a powerful fallen angel warrior with a heart as cold as ice and soul as black as the bottomless pit. For millennia, he has ruled his realm with an iron fist as he plots the demise of his ancient enemies. When one of those enemies dumps an unconscious mortal female in the courtyard of his fortress and leaves her there, Lucifer finds himself entranced by the beguiling beauty and tempted beyond all reason. But is the enchanting Nina an innocent pawn in the eternal game or part of a plot against him?

TEMPTED BY FIRE by Erin Kellison
A powerful dragon shifter has waited six hundred years to avenge the loss of his family, but the beautiful mediator sent to prevent violence among the Bloodkin doesn’t want to be his key to discovering the murderer—in fact, she wants nothing to do with dragons at all...

REBEL’S DESIRE by Laurie London
A jaded Iron Guild warrior cares about nothing except battling a ruthless enemy, but when a beautiful woman literally runs into his arms, he realizes she holds the key to his success. As passion ignites, he must decide whether to sacrifice the woman he’s falling for or dare to trust his heart again.

THE RESURRECTION OF SAM SLOAN by Erin Quinn
Trapped in the body of a human, the Reaper is about to fall in love with a woman he was never meant to have… When a reaper is trapped in Maggie’s estranged husband’s body, she knows only that the man with her husband’s eyes feels like a stranger… a compelling, seductive stranger who touches her in ways her treacherous husband never could. She wants to trust him, but what about the ghost who haunts their home, implicating him in a gruesome murder…

REDEMPTION by Bonnie Vanak
A cursed alpha wolf promises to free an enslaved Mage if she mates with him so he can sire an heir, not realizing she can destroy the dark secret keeping his pack alive.

RAGING DAWN by Colleen Gleason
After the vampires Max Denton hunts brutally murder his wife, he is nearly destroyed himself and spends the next ten years living a life of violence and revenge. But when sensitive information about his young daughter falls into the hands of the vampires, Max is forced to team up with the woman whose father ultimately caused the death of his wife. Savina Eleaisa has secrets of her own, and she’s determined to do whatever it takes to clear her father’s name: even if it involves seducing the most dangerous of vampires--with or without the help of the arrogant, brooding Max Denton.


Dark and Damaged: Eight Tortured Heroes of Paranormal Romance is available from Amazon Kindle, Kobo Books, Barnes and Noble Nook, Apple iBooks stores and other retailers. Find the links to your preferred retailer at: http://www.felicityheaton.co.uk/dark-and-damaged/

“Max,” Savina was whispering urgently. “Max, wake up.”
He became aware of his surroundings, dragging himself from the horror of the dream before he opened his eyes…and then had a moment where he debated between sliding back into the ugly nightmare—which at least he was familiar with—and waking up face-to-face with Savina Eleiasa.
In that brief moment of closed eyes and utter awareness, he drew in that spicy, floral scent that went straight to his middle, stabbing him with pleasure. At the same time, he sensed the warmth of her nearness burning into his bare skin…and a tickling sensation that could only be her glossy, ink-black hair as it brushed over his bicep. Then, he realized she had seen and heard him thrashing around, crying out—and from the dampness on his face, he’d possibly even been sobbing.
Dammit to bloody hell.
“Max?” She was still whispering, still touching him.
He didn’t have to open his eyes to remember the wide, sensual shape of her lips and the hint of delicate collarbone and throat exposed by the neckline of her frocks. He imagined what her hair would look like, all loose and falling around her shoulders.
Perhaps if he just stilled, steadied his breathing, and appeared to slide back into sleep she would leave him alone. Silently return to the hotel room next to his. Then he wouldn’t have to face her concern or her pity or—anything else.
But the scent, the warmth, the touch remained and at last he was required to open his eyes.
It was even worse than he’d imagined.
Savina was there, much too close, settled on the edge of his bed in a pool of white cotton and lace—how the hell had she gotten into his room anyway?—looking down at him. Though the only illumination was from the streetlights below and an anemic moon, he could make out enough of her features to see an arrested expression: wide eyes, parted lips, lifted brows, the shadowy arch of one high cheekbone. The mass of hair, spilling like black water over her shoulders and onto his arm. The deep vee of her nightgown, white against her smooth, scented skin. The curve of her narrow shoulder, the long line of her throat.
Even in the dimness, he saw—sensed—pity. Shock, too, perhaps. And he couldn’t bear it.
Max wasn’t thinking clearly. He realized that later…much later. But at the moment…he had no thought but to change the subject, so to speak.
To touch. To exorcise, and to experiment and…oh, dammit, to feel.
He reached for her, his callused hand gliding over her silky skin, up along her bare arm. Vaguely aware of her stilling, stiffening—but not pulling away—Max tugged her toward him: firmly, so that she was off-balance a little. So that one hand landed on the center of his bare chest, while he held the other wrist, drawing it to his side as he curled a hand around the back of her head.
In the recesses of his mind, he was prepared for her to pull away—and perhaps that would have been best after all.
It definitely would have been best.
But she didn’t. Savina gave a dusky gasp of surprise just before he found her mouth…but she didn’t resist.
And what a mouth. Softer than he’d imagined. Warm, sensual, sweet…responsive. Max lost all thought as he slid into the heat of her, half-rising onto an elbow so he could pull Savina closer, kiss her more deeply. She tasted hot and spicy, smelled like heaven, and was sleek and smooth and curvy. Her weight against him was insubstantial, yet it burned into his belly, arm, the side of his hip.
Before he quite realized it, he had his arms full of her, and they were tangled on the bed, beneath and around the sheets, body lined to body, mouth tasting mouth. He was naked, half-covered by the bedclothes, she was wrapped in flimsy cotton and lace. Her hair caught around his shoulders and clung to his sweat-damp skin, heavy and strong. She sighed and shivered and touched him…touched him, her fingers brushing his neck, tunneling into his hair, her lips meeting his, slipping and sliding and tasting.
And then all at once, he realized what he was doing. Christ Almighty.
His eyes bolted open, and then, terrified, slammed closed as he retreated into one last moment of sensuality. His heart rammed, his body thrummed. He was trapped.
And then, knowing no other way to escape, no other way to explain this mortifying, absurd, terrifying lapse, he gently pulled away from those delicious, satisfying lips and soft, curvy body. And lied.
“Mmm…Fe…licia…” He made certain the syllables of his wife’s name came out like a soft sigh, but intelligible enough that Savina would understand them…that they would explain his actions, excuse his presumption. “Feli…cia…”
Savina stilled. He swore he heard a soft laugh, or maybe it was a choked curse—Max couldn’t tell, for his ears were filled with a roaring—and she pulled away.
Still in character, though his body was leaping and hot and alive, and his mind couldn’t have been more fully awake, Max sighed and rolled over in his sleep.
When he heard the door close behind her, his eyes bolted open once more to stare at the ceiling.
Bell was right. He was most definitely an ass.

Grab the boxed set for just $0.99 to read this story and seven others…

Dark and Damaged: Eight Tortured Heroes of Paranormal Romance is available from Amazon Kindle, Kobo Books, Barnes and Noble Nook, Apple iBooks stores and other retailers. Find the links to your preferred retailer at: http://www.felicityheaton.co.uk/dark-and-damaged/