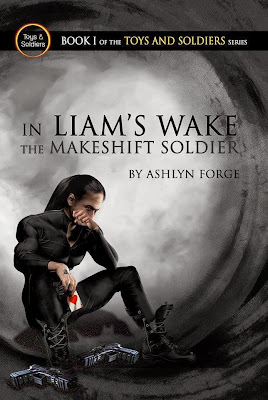 For eight years, Liam has been trapped underground in The Colony—a sanctuary so determined to stay hidden it forbids anyone from leaving once they’ve entered. His only hope of returning home rests on his best friend Riley who, on the eve of their escape, slipped into a coma.

Despite staggering debt, vengeful mutants and bounty hunters, Liam continues a seemingly never-ending quest for a cure to end Riley’s unnatural five-year sleep. Every night, Liam stares at the listless man who not only holds his escape, but his heart. The suffering can end, however; Liam must only forsake all hope of ever returning home again, abandon Riley to his fate, and wholeheartedly serve as a soldier for The Colony—the very people he’s trying to escape.

Live the life within his reach, or continue chasing the one just beyond his grasp? He need only submit.

More details and sample downloads - http://www.ashlynforge.com/in-liams-wake/
Authors Info:
Ashlyn Forge spends most of her days self-editing, writing, and editing. Her love of storytelling, and the imagination in general, has put her in an on-and-off relationship with Writing for a number of years. She is particularly drawn to anything resulting in blurred lines between magic and science, as is evident in the surreal world of her Toys and Soldiers series. Her literary ambition in life is to see one, if not all, volumes of the Toys and Soldiers Series tucked neatly under everyone’s pillow. If it were not for the discordant jumble of ideas clamoring for attention in her head, she would also take up crocheting.
Buy Links:
Amazon (ebook)
Amazon (paperback)
Kobo
B&N
Smashwords
Goodreads
Social Links:
Blog
Facebook
Twitter
Goodreads
Google+