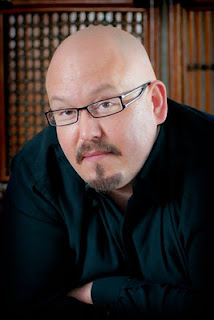 Stephen Prosapio received his Bachelors of Arts degree in Political Science from in .
After reporting for one of the nation's largest fantasy football websites, footballguys.com, he wrote his first novel, Dream War. Competing against 2,676 other novels, Dream War won a Top Five Finalist award in Gather.com's 2007 First Chapters contest. Dream War was released as an eBook in July 2010 and has often been on the Kindle Best Seller List. His suspense novel Ghosts of Rosewood Asylum was published June of 2011 by Otherworld Publications and has quickly become a favorite by people interested in the paranormal community.

Stephen resides in and is working on another paranormal suspense novel.
Welcome Stephan to my blog and thank you for the interview.
1.    When and why did you begin writing? What inspired you to write paranormal suspense novels?  I began writing short stories at a fairly young age but didn’t really begin until after college. Mostly short humorous pieces. I was often told that I missed my calling. I apparently was just delaying it. As for why paranormal? Like Stephen King says, “What makes you think I have a choice?”
2.    When did you first consider yourself an author? I don’t know about “author” but it was interesting to become a “professional” writer with deadlines. When I became a game reporter for footballguys.com, I was being paid (at least a little) to watch football and then write about it. It still took on that edge of work. A similar dynamic happens once you’re published. Starting novels just for fun isn’t going to cut it when you’ve got people waiting for the next book in a series!
3.    Did you have a teacher in school who influenced or encouraged you? Unfortunately not with writing; which is unfortunate because it wouldn’t have taken much encouragement to get me writing. I could have honed my skills much earlier. I did have some amazing teachers though, for which I’m incredibly grateful. One such was Mr. Randy Coe of .
4.    How has your environment/upbringing colored your writing? Well I don’t think any writer can write honestly unless they’ve experienced some part of their story. I don’t think it taints or colors the writing, I think if you stick to the core of who you are and give something of yourself to your main characters, your writing will stand out.
5.    What tools do you feel are must-haves for writers? “On Writing” by Stephen King. “Hooked” by Les Edgerton.
6.    Some authors say their characters are "real" to them. Is this the case with you? Yes. Absolutely. I traveled to a location to research for the current novel I’m working on. Driving around the town I experienced weird feelings thinking about what my characters “had seen and done” when they’d been in town, and at the same time it was as though I was scouting out what they “would see and do” when they got there.
7.    Which character did you have the most fun writing? Do you like one more than the others? Ohhhh that second question is a trap. Just like offspring/siblings/nieces and nephews, we love them all equally right?  Ha!  My favorite character to write in GHOSTS OF ROSEWOOD ASYLUM was Monsignor Macginty. He came out of the ether and helped me tie together my main character’s past and a few key plot points together…in one humor-filled scene.
8.    Do you ever suffer from writer's block? If so, what do you do to get over it? I suffer from laziness and watching too much television. THAT blocks writing. I don’t believe in the other kind. Writers write. It might be crap at first, but keep writing and the good stuff eventually comes out. When I really need to write, I read for about a half hour or so and then set a timer for a short period of time, maybe 20 minutes, maybe 35. Then I just write. No internet. No emails. No phone calls.
9.    What are you reading right now? Case Closed. It’s nonfiction about how Lee Harvey Oswald really DID kill JFK.
10. Do you ever come up with anything so wild that you scare yourself that leaves you wondering where that came from? Not “so wild” but once during the writing of my current novel, I really spooked myself. I had to quit writing for the night!
11.  What should readers expect from your novel; Ghosts of Rosewood Asylum? Well, if they are open minded, I’d like them to go in without expectations. It’s a fun story and it’s nothing if not unique!
12. What were your feelings when you first saw the finished product of your first book? It’s indescribable. It really is. Having waited so long and having the future of paper books somewhat in question, it was an amazing feeling!


Zach Kalusky, host of Sci-D TV's Xavier Paranormal Investigators, is ecstatic when he's given the opportunity to explore the most haunted site in Chicago for a Halloween Special: Rosewood Asylum, a place long made off-limits by the local government, plagued by decades of mysterious fires and unexplained events. It's Zach's dream investigation- but there's a catch: the network forces Xavier Paranormal Investigators to partner with the more dramatic-but less ethical-Demon Hunters. Now, Zach must fight for both his show's integrity and his team's loyalty while trying to protect his own secret: that he, himself, is possessed.

MY REVIEW:
This is the first book I’ve read by Stephen Prosapio I love ghost stories so I was quite excited to read and review this novel. Stephen’s writing is good his words flowed effortlessly and he did an excellent job with the character’s descriptions and the plot was unique. He combines a ghost story with a behind the scenes look into a reality TV show that investigates paranormal activity. I was hooked after reading the Prologue and the first chapter of this book.
Zach Kalusky is the main character a student at the Saint Xaviour University in Chicago, working on his PhD in Psychology. To help pay for his education Zach works on a tv show called Xaviour Paranormal Investigators. His team has just been told they are going to be allowed in to investigate the Rosewood Asylum but along with his team they have to work with another show’s cast called the Demon Hunters. Most of Zack’s team believe the Demon Hunters are more or less a fraud and not really sure if they can work together effectively. Having little choice the two teams have a meeting and make plans on how things will work. The Rosewood Asylum has been haunted for over 100 years and Zach cannot wait to get inside to get documented proof of the paranormal activity. During the investigation is where this book gets really good, there is mystery, suspense, hauntings, twists and turns and I was sure I had some of it figured out. I couldn’t put this book down till I hit the last page.

I really enjoyed The Ghost’s of Rosewood, the dialogue between the two tv cast’s made me laugh at times, the behind the scenes look into what it takes to put a tv show together is very realistic and Stephen Prosapio writing these scenes must of been fun but you can tell that the author must of spent a great deal of time researching as it seems very realistic. The Ghost-hunting, the history, and the mystery behind Rosewood Asylum are well written, I would suggest you pay close attention some scenes because there is a lot going on. It was a great read and I truly enjoyed this novel and would recommend to anyone who enjoys ghost stories and paranormal books.
Stephen Prosapio contact Info: