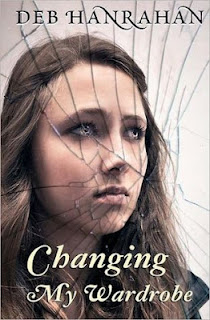 Lindsey, a high school freshman, views her new school as a place to start over. With the help of her friends, she hopes that a change in her wardrobe will prompt a change in her image. She has some success until her long-time nemesis, Avery, reminds Lindsey of her place. Without asking for help from the adults, the main character and her friends struggle to manage the bullying. Despite their efforts, tensions rise, and people get hurt. The ending of this book will leave the reader shocked and heartbroken.

Changing My Wardrobe is a cautionary tale about the immutable problem of bullying. This story not only looks at bullying from the victim's point of view but also explores the motives behind the aggressors’ actions. Changing My Wardrobe demonstrates the fluid and complex nature of bullying by shining a light on the contributing factor of social media.

Changing My Wardrobe by Deb Hanrahan

This is Deb Hanrahan debut novel, I really enjoyed Deb's writing, and the plot was great, loved the characters and it ended up being on of those books you just don't put down. This is a tragic story and one I would say ever high school youth should read. Deb Hanrahan has written a story of a young woman who just wanted to fit in and make her high school years better then what she dealt with in middle school.

We meet Lindsey who is a smart young woman, who maybe in middle school didn’t have the best fashion sense but received good grades. Teeny her best friend who has always been there for no matter what she wore. The first day of high school is the next day and Lindsey wants to make a fresh start. Teeny is right there to help her. Lindsey meets Marco on the first day of school and he is cute and seems to like Lindsey. Then we get to meet Avery the one who tormented Lindsey all through middle school and to make matters worse Avery has a boyfriend named Cal who is just as mean .......

Put all these great character’s together and you end up with a fantastic read. This story makes you feel and remember what high school was like good and bad.

Deb Hanrahan has written a terrific/realistic novel and the ending shocked me to my core.

I have to give Changing My Wardrobe 4 stars; the writing was great, the issue of bullying is so important, All Young Adults and parents should read this novel to remember and to keep your eyes open.

Welcome to my Blog Deb!


Did you always want to be a writer? And what inspired you to write?

Yes, I always wanted to be a writer, but my parents did not encourage a career in the arts. So, although I dreamt about writing, I never thought that I would actually do it. As advised, I picked a practical career that paid well but soon learned that my choice was a mistake. So when I had children, the decision to stay at home with them was a no-brainer. Eventually, my children grew-up, and it was time for me to move on from my full-time role as “mommy.” That’s when I started writing. At first, I just wanted to see if I could do it. I had no intentions of letting anyone see my manuscript, but one thing led to another and after two years of work, Changing My Wardrobe became a published novel.

How would you describe Changing My Wardrobe?

On the surface, Changing My Wardrobe is a story about bullying. Lindsey, a high school freshman, views her new school as a place to start over. With the help of her friends, she hopes that a change in her wardrobe will prompt a change in her image. She has some success until her long-time nemesis, Avery reminds Lindsey of her place. Without asking for help from the adults, the main character and her friends struggle to handle the bullying, but tensions rise and people get hurt. This story also touches on the topics of grief, loss, family relationships, and friendship.

Which character you had most fun writing?

I had a lot of fun with Jocelyn. I’ve always admired the oddball who doesn’t care what anyone else thinks. Jocelyn is definitely that person. I tried to make her as outrageous as I could. I wanted her to be the person Lindsey was too afraid to be.

What was your main source of inspiration for the story?

Bullying is so pervasive. In grammar school, I suffered through it, and as a parent, I’ve watched my kids deal with it. The adult community pays a lot of lip service to this issue, but many demonstrate this undesirable behavior themselves. It is a cancer. The reasons behind bullying are complex with many contributing factors, I’m not sure that there is a cure. Sadly, as long as some people feel superior and others feel inferior, bullying will persist.

What should readers expect from Changing My Wardrobe?

I tried to make CMW as real as possible. Living with three teens, I had a lot of help with the dialogue. I also wanted this story to have a hard but meaningful ending. Don’t get me wrong, I like a happy ending, but sometimes real life doesn’t give you that. As a young adult, I faced a life-altering event that had a profound effect on the trajectory of my life in both good and bad ways. I wanted to capture those feeling in this book, and that’s why I ended the book as I did.

How did you come up with the title of your book?

Coming up with Changing My Wardrobe was tough. The first title I wanted to use was already a published title, so I needed to find something else. I spent several hours lying on my couch in the dark thinking, and when Changing My Wardrobe popped into my head, I was happy. It’s the perfect metaphor for what the book is really about.

What books have influenced your life most?

Most of the books that have influenced me are works of non-fiction. Some of my favorites are Why Him, Why Her by Helen Fisher; The Five Languages of Love by Gary Chapman; Omnivore’s Dilemma by Michael Pollen, The Blue Zones by Dan Buettner. I’m a sucker for self-help books and books about health.

What are your current projects?

I’m finishing my second book titled Vestige, a supernatural horror story about two teenagers surviving the apocalypse. It will be available mid-June.

Do you see writing as a career?

I would love to write for a living, but it is a tough road. Vestige will have a sequel, so after I’m done with that, I will need to reevaluate my goals.

When did you first realize you wanted to be a writer?

I was in grade school, maybe fourth grade, when I realized that I liked to write. Throughout my school career, I excelled at writing over other subjects. But it wasn’t until recently that I worked up the nerve to seriously pursue writing.

As a child, what did you want to do when you grew up?

As a child, I wanted to be many things, but the ones that stand out in my memory are mom, nurse, scientist, astronaut, writer, and an actress.

Do you hear from your readers much? What kinds of things do they say?

I do hear from readers. Most feel strongly about the ending of Changing My Wardrobe. They either love it or hate it.

Where do you hope to take your writing in the future?

I have many story ideas, but after I’m done with Vestige and its sequel, I will have to reevaluate my goals. Writing is rewarding, but it takes a lot of time away from my family. Even when I’m not actually writing, I’m thinking about my current project, and I’m not always living in the moment. And of course, there is the financial end of it. This is a difficult way to make a living; there is a lot of uncertainty as far as income. Right now, I can afford to look at it as more of a hobby. That may not be the case in the future.

Who designed the covers? Allen Chiu

What was the hardest part of writing your book?

The hardest part of writing is maintaining a positive attitude. There were many times during the process when I thought that I couldn’t do it. I had to continually give myself pep talks in order to finish. I thought the self-doubt would be easier to deal with the second time around, but I was wrong. In fact, it might have been worse.